Staying in Touch with Community Partners

Planning a trip to visit community partners who are off the beaten track takes a lot of time and organising – but it is a very necessary part of what we do here at Ikhala Trust and has been our practice since we started the organisation in 2002. For many of the partners we visit – we are the only ‘outsiders’ who would take the time to come and see where and how they live, what they have achieved and patiently listen to the many stories they have to tell.

So we set off on Tuesday morning (20th September) at 6.30am and our first stop was Esikobeni Village (Idutywa) – 6 hours away – to visit Bonga and his team at Imbasa Community Development Services. The organisation had recently experienced some organisational challenges that they have now overcome and have renewed energy to continue the work they set out to do. Thanks has to be given to Thembekile Kanise, a long time associate of Ikhala Trust, who assisted in dealing with the problems they were experiencing that resulted in an amicable outcome. Thanks TK! You are always there when we need you – a true rural development activist and practitioner.

Despite suffering severe drought – there was no water in any of the rivers that we crossed – the vegetable garden is flourishing and we took along +- 2000 vegetable seedlings that the team were going to plant the next day. Accessing water is difficult, but they made a plan – we just pray for rain now so these seedlings can grow in time for harvesting towards the end of November.

Primary health care services remain the key programme for Imbasa but the ladies are also involved in a Savings Group and they continue to provide computer training.

The Community Centre is incomplete but plans are afoot to get the traditional council involved to assist, and we look forward to the completion of the building that would then be used as a multi-purpose centre. Thank you, Bonga, for welcoming us to your village and for the open and frank conversations we had with you and the team!!

Our next destination was Willowvale, which is about 40mins away on a fairly decent road – and as there is virtually no accommodation facilities in the area, we stayed at the Kob Inn, which is on the Wild Coast and on a gravel road about 35kms from Willowvale – this took us about an hour and we were relieved when we saw the SEA – by this time we had dust and dirt everywhere and Vuyokazi and I were coughing and splattering.

We had a relaxing evening and set off early the next morning (21st September) for the Msendo Village Woodlot Project – started in 2005 by a group of village members under the leadership of Nombeko Buyana. This project was awarded the Ikhala Best Grantee Trophy in 2009. Msendo Village is located 53kms from the main town, Willowvale, and true to form – we got horribly lost and spent more than 2 hours on yet another gravel road – the roads and landscape all look the same and there are a few signposts – but at least there were graders and road construction workers trying to level the boulders, so even though it was not the best – it was definitely better than 2 years ago when we visited them.

The unintended consequence of getting lost had a happy ending as we came across a little preschool and the lady in charge was absolutely delighted that we got lost as we were able to donate ‘porridge,’ jerseys and some odds and ends that we had in our bakkie. So off we went again … this time in the hope that we would eventually arrive at the village as we were already an hour late.

Preschoolers at the Emsengeni Preschool

We have written about Msendo before, but feel that it is worth mentioning again as there are very few of these types of projects that sustain themselves over such a long period of time – 11 years. The Woodlot was the brainchild of Mr Mondi, who works for the Dept of Environmental Affairs, but lives in the village and was meant to benefit the entire village community, but when the money for the initial set-up ran dry – Nombeko and a few women and 1 or 2 men continued ‘looking after the trees.’ Ikhala Trust contributed funds towards the purchase of more saplings and also assisted with the building of a structure where they could meet and also store their equipment.

Now that the trees have grown and are being harvested, some members of the village community want to lay claim to the profits the Woodlot Project is making and this has caused some tension in the group – but as they say they love their trees and will not stop doing what they do. 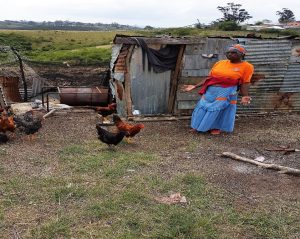 Nombeko, the go- getter and a few friends are now ‘growing’ chickens to subsidize their income from the woodlot!!

The resilience of rural women in particular never ceases to humble me and everywhere we looked – women were taking the lead – working the fields, chopping wood – doing the washing – carrying their children on their backs to the clinics – walking the children from school – carrying buckets of water on their heads – whilst almost everywhere the men were gathered around chatting about who knows what and sunning themselves whilst all these activities were happening around them – and when I asked the question WHY they don’t help – I was told quite simply – that’s just the way it is here!! I am glad that I don’t have to live like this – Heaven help the men if I was there – I would not tolerate this behaviour at all and I guess many of my female friends would not tolerate it too!!

With my soul fed – Vuyokazi and I set off for East London where we would spend the night (21st Sept) and visit Masivuke in Duncan Village the next day.

We popped in to see The Haven Wellness Centre, an ex-grantee partner – operating in Parkside, East London and they were delighted to see us. Despite some challenges they are still going strong and are also 11 years old now.

We arrived at Masivuke to a room full of people that Beauty, the project leader, had invited to meet us. The purpose of the visit was to explore possible new partnerships for them as they feel they now need to retire and hand over the baton to younger people to run the organisation. After a lengthy conversation we left them with the task of re-organising themselves and to fine-tune their programme and to contact us when this is all done.

So once again our trip was just a stark reminder of how uneven the development terrain is and how much work still needs to be done to turn the tide on the challenges that communities, and in particular rural, village women face on a day to day basis.

Thank you to everyone for welcoming us and for putting up with our late arrival and being so accommodating!!! We now have strength to push forward and are looking forward to our ABCD Festival in November at the Willows Resort and Conference Centre.

Asking people to say what their problems are is tantamount to asking them to say how useless, weak, empty and powerless and worthless they are in order for them to qualify to be helped

Community Development through an Asset-Based Approach
Scroll to top