“Ikhala” is the isiXhosa word for Aloe in English. The Aloe is indigenous to the Eastern Cape. It is hardy, resilient and thrives best in adverse weather conditions. The Aloe plant is also used for medicinal purposes. It was felt that the name was appropriate for a delegated fund in the Eastern Cape Province, as although it was expected that not everything would go smoothly, the initiative would prosper regardless of the adversities it faced.

Self-reliant, confident and vibrant organizations are able to envision and catalyse positive change in themselves and their communities.

To support community-led initiatives in the Eastern Cape by building relationships, enhancing capacity and facilitating access to funds.

The principle behind the work of Ikhala Trust is to sow where people have already laid a foundation. A grant will not be given unless social cohesion and mobilization are demonstrated by the community. Put another way, our grants (small) reinforce and build on communities existing assets (physical, social, financial, natural, human). In short it builds on people’s assets. This approach diverges from mainstream development paradigms, that are deficit oriented and needs based that often undermines and appreciates what communities have already done for themselves and by and large treats vulnerable communities as passive recipients in need of HELP and FIXING. 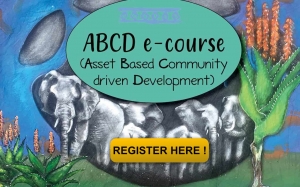