Planning trips to organisations in rural Eastern Cape is all about “planning for all eventualities” but this time round we did not anticipate such awful weather conditions which saw Nobuzwe and I stranded at the Hole in the Wall on the Wild Coast, drenched to the skin, mud-covered van and shivering as we could not get back to The Haven where we had booked in for 2 nights.

It is no wonder that many donors would rather take a safe option and support organisations that are easily accessible and that they can reach without too much inconvenience.  Hobeni Village outside Elliotdale should have been +- 7 hours but with GPS not picking up a signal and getting lost a few times, 7 hours became more like 10 hours.  We were travelling on awful potholed gravel roads for what seemed like forever and every hill and dale looked the same.  Asking for directions was indeed a challenge and my frustration was clear as it was already getting dark and we were still driving literally what seemed like in the middle of nowhere. 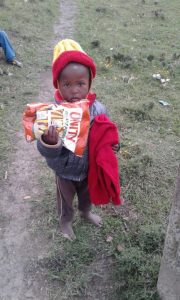 The infrastructure in most rural villages in the Eastern Cape is virtually non-existent and why it is believed that village people deserve less boggles the mind.  Heaven help if there is an emergency and someone needs to get to a hospital urgently – this will not happen as the 1 hospital and clinic that we saw was miles away from the scattered homesteads – we then have to believe what we read sometimes about the tragedies that occur in these village areas.

Whilst there is clearly an attempt to fix some of the roads – everything we saw was literally left abandoned and the fact that it poured with rain did not help us one bit.  The van I had was clearly not built for these roads and weather conditions and before we knew it the lock on the canopy snapped and we had to use a rope to tie it down – talk about the strength of a woman – poor Nobuzwe on several occasions had to get out with her feet in the mud to try and push our van which was slipping and sliding across the road and we were praying all the time that a guardian angel would appear to assist us.  These guardian angels came in the form of 5 little boys who immediately went about the task of collecting rocks to place under the tyres so I could try and get us out of the mess – what a hair-raising experience and one we will not easily forget. 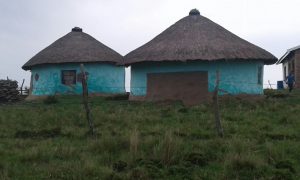 Despite these trying conditions and frustrations and worry about our safety – our visit to Ikhaya Loxolo in Hobeni was indeed heart-warming.

There is something very special about village people – our experience has largely been one of gratitude that we travelled all the way, excitement that we wanted to see where and how they live and what they do and joy at the many different donations that we had collected and delivered to them.  We received quite a substantial donation of clothing, bedding and Future Life (cereals) products that was received with deep appreciation and gratitude. 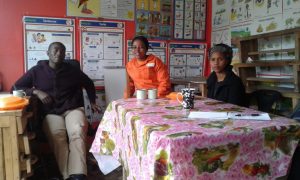 We even handed these out along the way especially to children who were walking along the roads covered in mud – some children however when we stopped took one look at me and ran for their lives – they were clearly told not to take anything from strangers and especially if the stranger was in a white van and looked like a man and was not Black – Nobuzwe and I were in stitches everytime this happened and no amount of persuasion by Nobuzwe that we were innocent and would do them no harm could convince them to fetch packets of cereal and some chips. 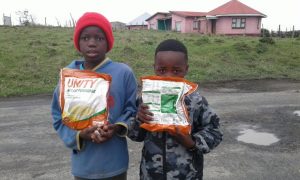 But finally, we arrived back at The Haven relieved and happy that we were safely back where we started and The Haven kindly agreed not to charge us for the night that we could not get back there due to the weather and dangerous driving conditions – there are still good people around for sure. 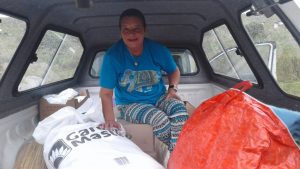 We prayed for good weather on the way home as we needed to get to Grahamstown before 13h00 on Friday, 6th October to attend Mary Humprey’s Memorial Service – and our prayers were answered – we set off at 5.30am on the morning and despite struggling to get out at the Haven as the wheels were spinning on the wet grass – Nobuzwe again rolled up her sleeves and pushed the van with all her might and yeah we were off.

We never thought that driving on the tar road would bring so much joy – the things we take for granted here in the city. 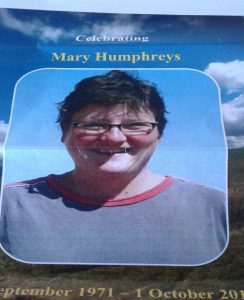 We made it into Grahamstown with 20 minutes to spare before Mary’s service started at the St Mary’s Chapel at Rhodes University.  Mary must have been watching over us as this leg of the trip was uneventful.

So to all the village organisations out there – you have gained new respect and commitment for our support to you whether that be in cash or kind.  Life in deep rural Eastern Cape is not for the feint-hearted and yet this is exactly where all the support is needed.

They have natural assets in abundance – beautiful arable land, lots and lots of space, clean fresh air – clean, fresh water remains a critical challenge but there is also human and social assets albeit that we engaged mostly with women and children, not sure where all the men are when wood needs to be collected, fires made for heating and cooking and children to be cared for – our challenge is to ensure that we find ways of leveraging these assets to create a socially just and sustainable livilihood for the village people of the Eastern Cape.

Thank you for welcoming us into your homes and your organisations and thank you for helping us when we struggled along the road.

Rising from the Devastating Carnage of the Fires