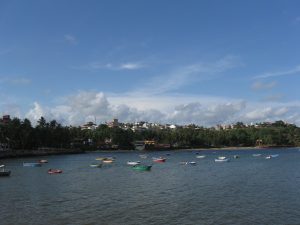 As with the first festival, Ikhala Trust Director, Bernie Dolley, has gone off to do some exploration, make new contacts and share in the learning experience that is ABCD.  She is accompanied by Chris Engelbrecht, one of Ikhala Trust’s trustees, and Lesley Haynes from LegalWise, an ardent supporter of both Ikhala Trust and ABCD in South Africa.

LegalWise and Ikhala Trust have teamed up, and will be doing a presentation on the ABCD Journey in South Africa.  The presentation will be on 16 January 2017 at 3:30pm under the program heading “Inspirational ABCD Stories from the Field.”

Dona Paula is a former village, but currently a suburb of Panaji, the capital of the Indian state of Goa.  The UNESCO World Heritage Site of Old Goa lies 10km east of Panaji.  Within Old Goa is the World Heritage Site of the Basilica of Bom Jesus, where the mortal remains of St Francis Xavier are held.  A public viewing of his remains is held at the prerogative of the Church in Goa (last held in 2014).

Goa is India’s richest state with a GDP per capita two and a half times that of the country.  Tourism is the largest contributor to income in the state.  Goa has the best qualify of life in India, according to the National Commission on Population.

I can do nothing but agree with Bernie’s assessment: “This is super-exciting!!”