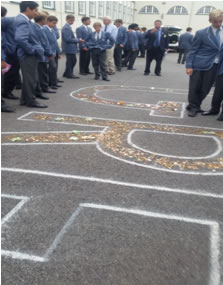 On Friday morning the 11th March immediately after the morning Assembly, the Rector, Mr Crawford, staff and the ‘men’ of the Grey assembled outside on the quad and the traditional coin-laying ceremony got on its way with the Rector making a contribution of R690.00 (wait a bit not in coins but in notes) from money that had been handed in at the office but never claimed.  So he set the ball rolling and very quickly the teachers stepped in to fill the letter ‘G’ and the boys filled in the letters ‘REY’.  This is always a great experience and watching it all unfold and counting in my head how many seedlings I will be able to purchase gets me very excited.

During the financial year March 2015 – February 2016 were purchased 26 513 cabbage, spinach (the favourite by far), celery, beetroot, onions, cauliflower and broccoli just to mention a few  seedlings were distributed to more than 15 schools and local projects and households.  The vegetables are used in soup kitchens and distributed to poor households in the local communities where they are grown.

We are hoping that others will take up the challenge and pass their coins to us so we can increase our supply this year.  It’s fun, does not take too much effort and makes a huge difference in the lives of those who receive the seedlings.

Thank you again to Mr Crawford and the staff and especially Amore Kember (a teacher at Grey), her fellow colleagues and her team of community service boys who are in charge of this particular project. 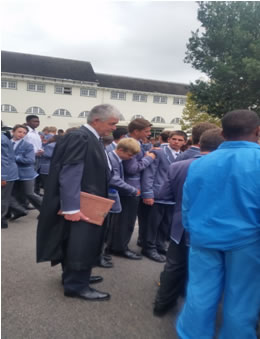 We at Ikhala Trust and the community partners we support are deeply grateful and sincerely appreciate that you have adopted our ‘Seedling Bank’ project.